Do you ever feel that you're just ticking the box? The business has asked for training. Maybe it's for a mandatory requirement? You'll do your best, but you know that learners, and the business, aren't that interested. It just has to be delivered and recorded. Job done. Box ticked.

Nobody wants to be just a box-ticker, do they? As training professionals, we want to be in the business of behaviour change. Whether the need is induction, compliance, specialist skills, leadership or personal development, we want to help people do more of the things that make them successful, less of the things that cause problems, and sometimes help them do new things altogether.

But achieving behaviour change is difficult because learners are human beings and subject to lots of normal human biases and barriers. We like to take shortcuts. We find it hard to change from established practice. We’re very influenced by peers. And we frequently overestimate our own capability. So how can you design training interventions that overcome these biases and barriers? Interventions that help to change behaviour and deliver impact – for learners and the organisations they work for?

We can start by borrowing ideas from experts in behaviour change, experts like behavioural scientists and advertising agencies. Then we can use those ideas to design training that's focused on delivering impact. We're looking for ideas to help cut through the noise and tackle those innate human barriers that hinder our ability to learn and adapt. Ideas that help us do much more than just tick the box, and maybe let us get rid of the box altogether.

So, what can we learn from the behavioural sciences and advertising industry? Let's have a look at some of their tools-of-the-trade and consider how these might inform what training professionals can do.

Give them a nudge

Behavioural scientists know the value of a nudge in the right direction. Have you ever adjusted your driving speed in response to an electronic sign with a frowning face? Ever got out of the chair when that band on your wrist buzzed to remind you to take a few more steps? Ever grabbed a healthy snack by the supermarket checkout? If you have, then you’ve been 'nudged'.

In behavioural science, a nudge is any feature of the environment that attracts our attention and changes our behaviour. Nudge Theory recognises that humans are not logical calculating machines and can't always be relied on to make good choices, even when they know what they 'should' do. Instead, nudges speak to our innate instincts, biases and social conditioning. The theory now informs all sorts of disciplines where changing behaviour is the goal, and one of its leading lights, Richard Thaler of Chicago University, recently won a Nobel Prize for his work.

What can training professionals learn from Nudge Theory? An effective nudge will usually have four key characteristics. It will be Easy (I clearly understand what I need to do), it will be Attractive (I want to do it), it will be Social (doing it makes me feel part of the group), and it will be Timely (I get the nudge as close as possible to the point at which I need to use the behaviour).

What would these characteristics look like in a training intervention? We can make it Easy (cut out excessive detail and focus only on key messages), Attractive (connect those messages to what really motives the learner), Social (show how other colleagues model the required behaviour), Timely (go beyond the ‘one hit’ and deliver learning as a campaign using multiple channels).

Thinking like a behavioural scientist, and making your training into an effective nudge will help you deliver impact. Now what can we learn from the masters of influencing behaviour – the advertising industry? We've all experienced their work, and probably all been influenced by it. In some cases, we'll have changed our behaviour as a result – made a purchase, switched suppliers, given a donation, and so on. So what are some of the things that make advertising campaigns stick, and can we borrow them to make training more likely to influence behaviour?

Everyone has their favourite funny TV advert. It might feature dancing builders, a short-sighted gym instructor or a drumming gorilla. Humour can build strong positive association with a brand or an idea. It helps make it memorable, and the 'shared joke' builds an important social connection. "Diamond Shreddies" are a great example.

The well-known square lattice breakfast cereal had become a moribund brand for Kraft Foods in Canada. Sales and market share had been slowly declining when, in 2006, Kraft approached advertising agency Ogilvy and Mather to revive its tired image. The agency responded by simply turning the product through 45 degrees, and Diamond Shreddies were born. 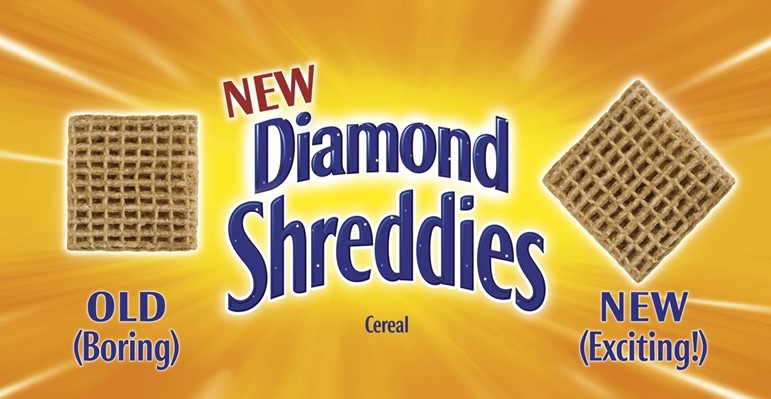 The campaign that followed traded on the irony that absolutely nothing about the product had changed. Blind tastings, combo-packs and fake 'controversies' all parodied conventional advertising approaches. The campaign created an in-joke with consumers that positioned Shreddies as a fun and consumer-friendly brand. And it changed the behaviour of those consumers, leading to an incredible 18% increase in market share for the product in Canada.

Training, on the other hand, tends to be a humour-free zone. It's a serious business. It's not appropriate to poke fun at our work or our organisation. But why not? Paradoxically, when it's done well, humour demonstrates that you take your audience seriously. You‘re trusting them with the intelligence to get the joke and understand the message. And if you're able to use humour, you might achieve another valuable prompt to behaviour change that advertising agencies know all about.

In 2012, a short video went viral on social media. It features a series of simple animated characters killing themselves in bizarrely stupid ways (skinny dipping with piranha fish, dressing up like a moose in hunting season, etc.), all to the accompaniment of a cheery song called 'Dumb ways to die'. Within two weeks the video had been viewed more than 30 million times and generated over 700 media stories around the world. But what was it all about?

In fact, 'Dumb ways to die' is a rail safety campaign created by advertising agency McCann for Metro Trains in Melbourne. In the final few seconds of the video, three characters are killed through unsafe behaviour around the railway – a really dumb way to die. And the campaign worked. Metro Trains reported a 30% reduction in near-miss incidents as a result.

Dumb ways to die uses humour, of course. But it also succeeds through surprise. It doesn't look like a public service announcement, and it doesn't sound like one. It engages the viewer's curiosity, and only delivers one simple message right at the end. And it‘s the surprise that helps the message stick, because it makes us think.

'Reduce the cognitive load' is a common mantra in training. The implication being to make the delivery easy and obvious so trainees don't have to think too hard. But this approach can end up meaning 'make delivery boring and just like all the other training'. If you want someone to remember something and act on it, try increasing the cognitive load. That will make them think about it, internalise it, and build associations. 'Dumb ways to die' looked and felt nothing like a rail safety campaign, but it increased rail safety. Not so dumb after all.

Using humour and surprise can be effective ways to help your message stick. The examples above show how they create the positive associations that promote behaviour change. Another key driver, that ad agencies know all about, can be termed 'relevance'.

The #LikeAGirl campaign created for Always by ad agency Leo Burnett is a great example of how to make a message relevant to your target audience and create an emotional connection that helps drive behaviour change.

The insight behind the campaign was to recognise the drop in confidence that many girls experience when making the transition through puberty. By subverting the derogatory phrase "...like a girl" and turning it into a message of strength and opportunity, Always shows it understands the many challenges girls can face at puberty, and is committed to empowering them.

The relevance and emotional connection of the campaign was demonstrated when the short film that encapsulated it achieved over 85 million views in more than 150 countries. Positive association with the Always brand was demonstrated through a 300% increase in their Twitter followers, whilst their YouTube Channel subscriber numbers grew by over 4000%! The campaign does not refer to any Always product, yet 'intent to purchase' measures rose by over 50% in the target audience.

What might 'relevance' look like in the training context? It means linking learning messages to things that matter to your audience. That might be pride in the brand, loyalty to colleagues, care for customers – whatever it is that motivates people in their work. And wherever possible, relevance means including colleagues in developing and delivering the training messages.

What would Barry do?

OK, so training doesn't get the budgets that advertising agencies work with. We probably won't have focus groups or celebrities to front the campaign either. But we can acknowledge that these agencies spend a lot of time thinking about how to change behaviour, and changing behaviour is what we want to do. So it’s worth considering what they can teach us.

Acteon was recently asked by Channel 4 to create a new health and safety programme for staff. Despite its importance, is there a more 'box-ticky' area of training than health and safety? Except in high-risk environments, colleagues usually glaze over at the thought, and even well-intentioned organisations focus more on meeting their mandatory training requirements than actually making workplaces safer.

Channel 4 wanted to do better than that. They wanted to engage colleagues and drive the key behaviours that help keep everyone safe. So we used some borrowed ideas to help. The training is delivered as e-learning and begins with a short parody of 'classic' health and safety training, with plenty of bullet points and, yes, boxes to tick. But then things change. The key messages are delivered in a music video featuring a specially commissioned song performed by the UK's leading Barry White tribute act. 'Barry' sings about the simple actions all colleagues can take to keep each other safe, and he’s accompanied by a backing band made up of Channel 4 colleagues. Barry is the accessible and acceptable voice of authority. 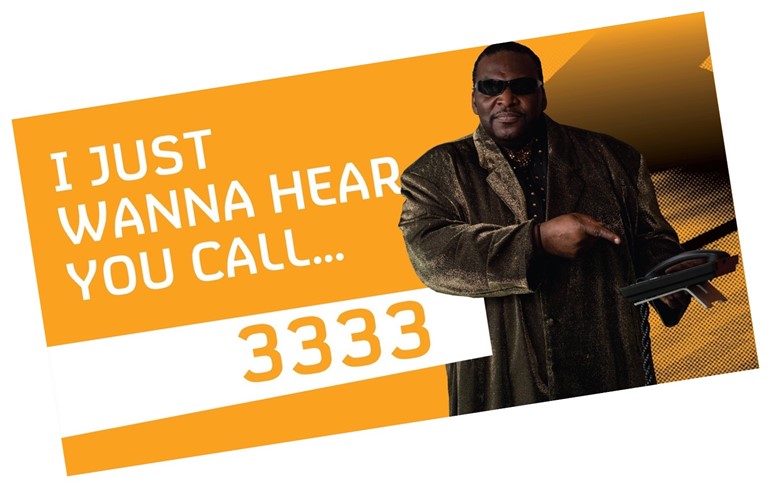 So why did we do it this way, and why did it work? It was fun, of course, but there was some serious thinking about behaviour change behind the approach. We used surprise – it's safe to say not many Channel 4 colleagues expected to receive their health and safety training from 'Barry' singing from the roof of the organisation's Manchester offices. We used humour, in the lyrics, in the video, and in the conception. The quirky approach, and focus on looking after each other, built relevance for colleagues, as these are core Channel 4 characteristics. And we turned the core message into a nudge. "What would Barry do?" prompts help remind colleagues of key actions in a variety of workplace situations.

This approach worked for Channel 4. The right solution might be very different in another organisation. But thinking about things like humour, surprise, relevance and nudges will help you connect with the innate human characteristics that have such a big influence on our actual behaviour.

"They may forget what you said, but they will remember how it made them feel" is an oft-quoted but powerful statement of how important this connection is. Paraphrasing it to "If they remember how you made them feel, they are more likely to act on what you said" captures what we’re trying to achieve. So why not give it a try? Building training interventions that speak to our innate human instincts, biases and social conditioning makes them much more likely to deliver behaviour change and impact. And that feels much better than just ticking the box.