There are little things that we can all do to prompt behavioural change. But can we influence a complex issue like gender inequality through small everyday actions? Marking International Women’s Day, Rebecca Trigg draws on her experience of nudge techniques to share ideas for creating more inclusive and balanced workplaces for everyone.

You probably know that I work in L&D. You probably also know that I’m a woman. And at the recent Women in Learning session at the Learning Technologies conference, I was pretty saddened to hear that the disappointing statistics published two years ago are still valid – in simple terms, 70% of junior roles in L&D are held by women and 70% of senior roles are held by men. I know this is not unusual, and some industry stats are much worse. But I was shocked, all the same.

Exploring this further, I came across a fascinating study which considered how and why this is much broader than a feminist issue. Researchers Robin J. Ely and Irene Padavic dug into behaviours within a global consulting firm and reached their ‘inescapable conclusion’ that the problem stems from a long-hours culture based on overselling and overdelivering.

Paradoxically, the well-intentioned ‘accommodations’ designed to offer flexibility, which were usually taken by women, actually acted to reinforce gender imbalance. The impact? A workplace that is less healthy and less balanced for everybody.

My day job at Acteon is to help clients find ways to promote and sustain behavioural change. Usually in a learning context, and increasingly using the power of behavioural science to nudge people into acting in a certain way. So, after the Women in Learning session, I started thinking about what individuals and organisations could do to create healthier and more equal workplaces. I know from experience that in order to change behaviour at scale you need to think about how we’re all programmed as humans.

Using the Behavioural Insights Team ‘EAST’ framework, here are some ideas for practical ways to nudge behaviour towards everyday workplace inclusion. I’m not a diversity expert – this is just my take on how individuals and organisations could use neuroscience to shift those statistics. 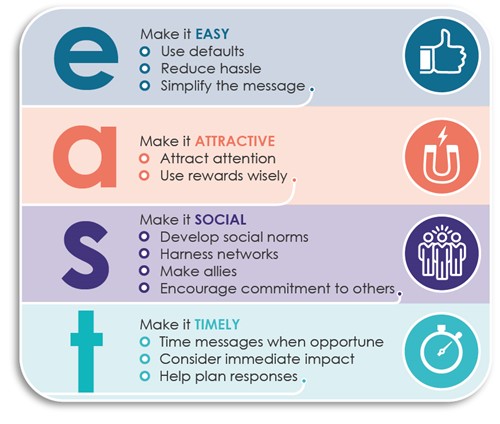 This list of 'nudges for equality' is available as a PDF toolkit. Download, share and pin up on your office wall to help encourage these habits in everyone...

1. Harness the power of defaults
Humans have a strong tendency to go with the default, as it’s easy to do.

2. Reduce the hassle factor
Reducing the effort required to do something can increase take-up.

3. Simplify the message
Break down something that might be seen as a ‘complex goal’ into smaller, easier chunks.

4. Attract attention
We are more likely to do something that our attention is drawn towards.

5. Use rewards wisely
Design rewards and sanctions for maximum effect – financial incentives work but highlight other benefits too.

7. Use the power of networks
Networks lead to collective action, provide mutual support, and encourage behaviours to spread peer-to-peer.

8. Encourage people to make a commitment to others
We often use commitment devices to voluntarily ‘lock ourselves’ into doing something.

9. Prompt people when they are likely to be most receptive
The same offer made at different times can have drastically different levels of success.

11. Help people plan their response to events.
There is a substantial gap between intentions and actual behaviour.

If you’re interested in reading more about nudging equality in the workplace, then there are some links below to stuff that I’ve enjoyed reading. Despite sharing this on International Women’s Day, this really isn’t a women’s issue. It affects all of us, regardless of gender – it’s about making our workplaces healthy and accessible for everybody.

To carry on this conversation, please drop me a line sometime! (rebecca.trigg@acteoncommunication.com)