Many of our everyday choices are influenced by a 'default setting', which makes it easier to choose one thing over another. Acteon's Sarah Wightman considers how we might identify and switch default settings where we need to prompt a change in behaviour...

We’re constantly faced with tiny choices in life. Sometimes we know we ought to do one thing but it’s easier or more tempting to do the other – like picking up a donut instead of an apple. Sometimes the problem is we don’t quite get around to fulfilling our good intentions with actions.

So if your role involves trying to encourage colleagues to take particular actions (whether in compliance, health and safety, habits for well-being, team interactions, or anything else) it’s vital to understand the human fallibility which causes the gap between desirable and actual behaviour.

As Acteon’s Rebecca Trigg describes it: “Successful behaviour change involves less telling people what to do, more making them want to do it”. And part of that comes down to removing barriers, and making it as easy as possible for people to change their habits. 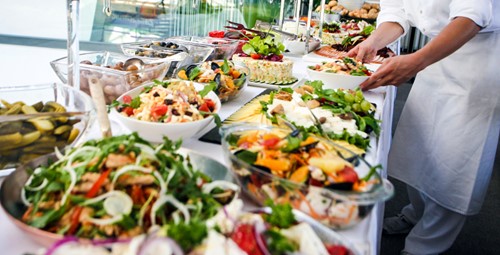 Ditch the burger for a salad? How would you persuade people to choose the healthy food option?

Encouraging people to make healthy food choices is notoriously difficult. If there’s one area where people really dislike being told what to do, it’s in their choice of food. Even when the healthier option might be clear, readily available, tasty, maybe even cheaper, the less healthy option is still likely to be more popular.

Healthy eating campaigns have mixed success at best. Their messages are often interpreted as patronising and unwelcome intrusions into personal space. They might seem boring or depressing. And choosing a healthy option is always something that people can do tomorrow instead of today.

We’ve not been helped by a hugely successful deluge of nudges in the opposite direction by food companies over the years asking if we’d like to ‘upsize’ or ‘supersize’, or have fries on the side. Or by the cunning positioning of chocolate bars and sweets by shop checkouts, often at child height for maximising pester-your-parent power.

So how might we change some of these habits, and encourage healthier food choices without aggravating people?

A recent experiment by the Copenhagen-based iNudgeyou team showed striking results from a simple intervention.

The team started from the premise that vegetarian diets have been shown to be more environmentally sustainable and better for human health than meat-based diets[1] [2]. They designed an experiment to test the effect of a small nudge on people’s willingness to choose a vegetarian option.

They did this simply by changing the ‘default setting’ [3] [4]. The ‘default’ is the option that is presented to you unless you actively choose an alternative.

In Group 1, 6% actively chose the veggie option, but in Group 2 a whopping 87% stuck with their vegetarian default. 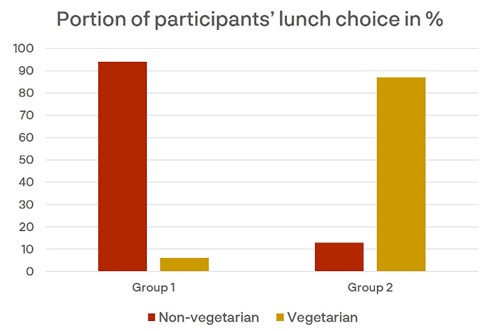 Even though the participants were only informed of the experiment afterwards, 90% of them said they approved of the nudge.

Switching the ‘default setting’ has been used in significant public policy changes recently in the UK. Notably, after many years of debate, England’s default for organ donation was changed to an ‘opt out’ system in 2020, with the hope that rates of donation will increase.

The UK has also made a legislative change to pensions over the last few years, with the ‘auto enrolment’ scheme requiring employers to enrol employees into a pension, with the employee then having the choice to opt out.

How could you think about using this behavioural insight at work?

Start by identify the problem you’re trying to address. Then work out if there is a default pattern of behaviour behind it, and how you could change the default setting.

Here are a few examples:

Imagine if you have teams who don’t interact much with each other and you want to encourage more mixing. What makes it hard for them to mix? Perhaps they sit in different areas and don’t need to move physically between each other’s spaces. That’s the current default.

So could you change that default? Mixing up seating arrangements might be going too far, but perhaps there’s a simpler change… Could you place the water cooler in one team area and the stationery cupboard in another, so that everyone has to walk through the other team’s space sometimes?

Do you have a canteen or catering where disposable packaging, cups or utensils are the default? The default could be changed so that real cutlery/cups or no packaging is offered unless 'takeaway' packaging is requested.

How effectively does your organisation’s recruitment process promote diversity and inclusion? Are there some default settings you could change to improve it? If you offer an optional module for diversity training in recruitment, perhaps all recruiting managers could be automatically enrolled into that training module rather than choosing to take it?

We know we all sit too much. Could standing desks be provided as a default to new employees, rather than staff specifically having to request them?

There are endless places where default behaviours exist. Take a look around and see if there are some that could easily be switched to a more positive starting point.

Changing default settings is potentially a very effective way to influence behaviour change at low cost, without too much disruption, and with less effort required from busy colleagues. It still leaves people free to make a choice, but it becomes easier for them to follow the option that’s (hopefully) better for them and for your organisation.